We all knew this one was coming.  My first encounter with the works of Tolkien was, surprisingly, at a later point in my life than you’d think.  It was 7th grade and in Literature class we read “The Hobbit.”  The story was vaguely familiar to me: I had seen the series in paperback form scattered amongst my step-sister’s books and the image of slimy Gollum on the cover made an indelible impression on my mind. 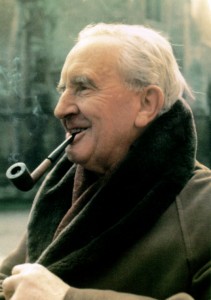 When first examining the story, I was less than enthused.  Throughout my childhood I had avoided stories where the main characters were humble, seemingly ‘weak’–namely children.  So imagine my disdain for a story who’s hero was a small, whining child-like person.  I wanted to see tall and proud knights, supermen or warriors.  But Tolkien’s magic worked its way into my mind and by the time actual people were introduced at Esgaroth, they seemed foreign and distant to me.  I wanted to stay with the dwarves and hobbits.

Soon after, I discovered my mother was a devout fan of his work (to this day I don’t know why it had never come up before).  I picked up her copy of “Fellowship of the Ring” …and never made it passed the prologue.

It took the release of the movies to finally push me to read the trilogy.  I quickly became a purist fan, being mildly upset at the editorializing of the films.  I can honestly say there were scenes in the book that were far more thrilling than anything portrayed on screen (ie: Gandalf verses the Witch King before the gates of Minis Tirith). 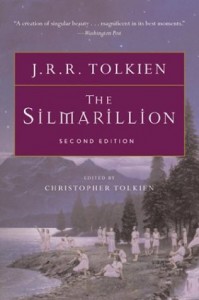 Any true inspiration, however, didn’t come until I was exposed to “The Silmarillion.”  I purchased a mass market paperback copy and tried to read it.  Unfortunately, I couldn’t get past the strange and hard to pronounce names (of course I wasn’t reading it aloud, but even in my mind this posed a challenge).  I found a copy of an old audio recording of the book, and took it with me during long walks.

The serene surroundings of an empty Florida subdivision, coupled with the powerful voice of Martin Shaw, seared the story into my psyche.  The grand depth of the creation of Middle-earth and the epic struggle of the mighty Valar and the elves was far more exciting and provoking to my imagination than any other Tolkien work (I guess I’m still looking for heroes in my fiction).  The beauty and sorrow of Beleriand was captivating and intriguing.

So how has this influenced my work?  Look around :P.  I think I will always be chasing Tolkien, whether in my comic or writing.  I will always be looking for a city like Valmar, perfect and shining with the Sun.  In my heart there lays an ancient anchor, pulling me to a world that is old and mystic, free of the shallow accoutrement of our age.  So whether in real life or in my fiction I search for it.  Perhaps I will never fully see it until I die.

“For the lesser even as for the greater, there is some deed that he may accomplish but once only and in that deed his heart shall rest.”