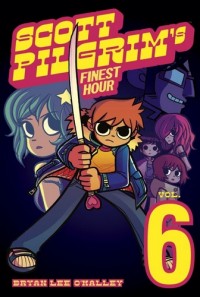 Usually my recommendations are for traditional novels, works of profound high fantasy–or whatever.  But lately I’ve been on a comic book kick and thought I’d plug something awesome.  A week or so ago I wrote on my impressions of “Scott Pilgrim vs the World” movie.  Immediately after seeing it I ordered the books.  After several painful days they arrived.  And blew my mind.

Scott Pilgrim is a 6-part graphic novel series, written and illustrated by Brian Lee O’Malley.  Styled much like Japanese manga, the series follows the life of 23 year old Scott, a Toronto native.  I won’t bog you down with too many details–much of it has been discussed online already.  Suffice it to say, Scott is compelled to battle the 7 evil exes of his new girl, Ramona Flowers.

Why should you read these books?  If you visit my site, you’re probably already a fan of comics, so it shouldn’t be strange for you to read some more (its Wednesday by the way, new comic book day).  Scott Pilgrim is quirky and hilarious.  The story plays off of many manga/comic/video game themes in a way that is fun and original.  The quick banter between Scott and his pals immediately pulls you into their relationships.  You feel like you’re part of the gang, going to shows, hanging at the pizza place, or sitting on Young Neil’s bed.

The story grows deeper with each book.  Although O’Malley maintains the light-hearted and sometimes unexpected humor, there is an underlying complexity unfolding.  We see into the characters’ pasts, the jumbled web of their relationships, and the confusion we can all relate to as we figure out what to do with our lives.  O’Malley leans heavily on the drama of relationships (in this series and in his earlier book).  It is a hook that makes any story–when done right–unquestionably addictive.  Pick up copies of this series and you’ll–like me–burn through them in a matter of days.

News has it that a special box set is on tap for November, with a special poster… or something.