Following up on my post from yesterday, here are some more snippets from my new moleskin notebook.  I was working out some ideas for an upcoming character’s dress.  Gee, I never thought making comics would force me to be a fashion designer! 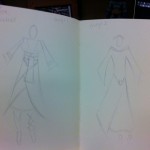 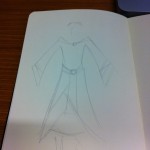 I kinda like how the third dress came out.  I combined elements from the first two.  We’ll see what I end up with when she appears in a future issue (several weeks from now).  All in all, I think the moleskin book is convenient.  I’m still not totally decided on it yet.

Also, if you follow my twitter, you may remember me blathering on about a picture I want to add to my about page.  I haven’t finished it, but here, at least, is a sketch.  This proves I’m actually working on it: 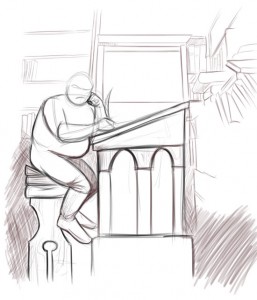 I like how it’s shaping up, but it needs much more work before its done.