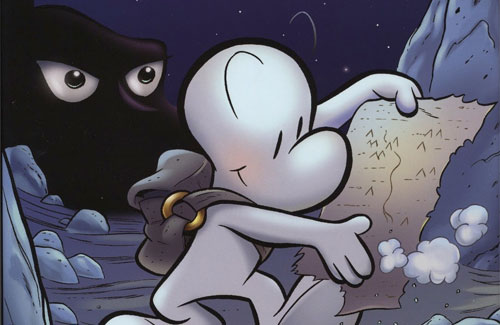 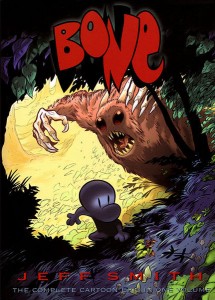 Bone was a self-published fantasy comic series which debuted in the early nineties. It was written and illustrated by Smith, who was so passionate about releasing his work, he created his own comic book publishing company to get it out there. The story of Bone revolves around 3 cousins, Fone Bone, Phoney Bone and Smiley Bone, who are exiled from their village (Bonetown) and end up in the strange and mysterious Valley. There they encounter talking animals, vicious yet silly rat creatures, and the kindly people of the Valley. They are soon pulled into an ever-escalating adventure for the very fate of the land.

Smith once said he wanted the fantasy elements of his story to differ from what is traditionally seen in the genre. To that end much of the ancient, mythical architecture, creatures and lore are inspired by a wider range of influences other than traditional European fairy tales. The ruins and cities are reminiscent of Aztec temples. The mystical powers of the fabled Thorn are esoteric and haunting. Are her abilities a gift or a curse? Will they  help her save her people, or draw her down a path of evil?

The reason I love the Bone series is because of how accessible it is. It’s been praised for being a quality comic series for children, but there is depth and character-building that surpass many “adult” level books and stories. Smith’s artwork is so unique and vibrant. The Bones are delightful characters that almost leap from the pages. The lush and varied landscapes immerse you in the world of the Valley. And the newest editions, with the color work of Steve Hamaker, make it and even more enjoyable read. 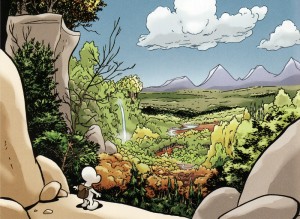 The plot of Bone is vast and expanding. The 10-year series seemed to grow in the telling, and with each volume builds upon the last. You will be enthralled with the plight of the plucky Bone cousins, and thrill to the surprises the people of the Valley hold. The depth of “the Dream” world is intrigue and terrifying, all that it should be. The villains are devious and driven. And the story’s end is touching, satisfying, and a bit sad. As any great epic should end.

There are many editions of Bone, but I recommend the 9-volume Scholastic editions, with the beautiful color work by Hamaker. Do yourself a favor and pick ’em up today.

Purchase Bone, Vol. 1: Out From Boneville

Know of a comic that you love and want featured on the site? Hit me up here (or: adam[at]talesofmaora.com) with the pictures or links.