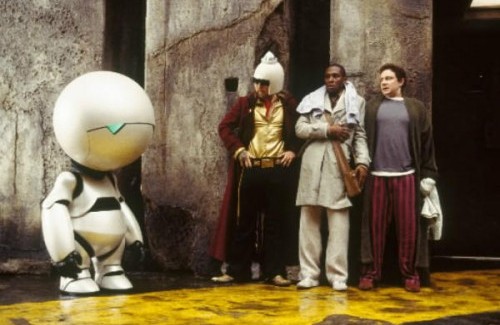 Last week I talked about a new exercise I’m doing to improve my writing. I found six books similar in genre to read and analyze to eventually perfect my plotting. I read and wrote out my thoughts on Storm Front, by Jim Butcher. After meeing Harry Dresden, I moved on to an older, but very much beloved, occult detective named Dirk Gently.  Here are my thoughts on Dirk Gently’s Holistic Detective Agency, by Douglas Adams.

Remember these are just my thoughts, not a proper review. Devoted Adams fans can just relax. Go read it if you like. 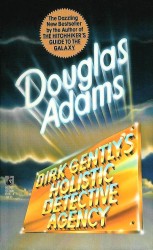 Did you like it? This one is hard to figure out. I guess I would say I liked it, but I had a hard time following the story. This’ll probably come up in the other questions, but my enjoyment of the story was hampered by the seeming lack of direction early on. Although overall I’d say it was enjoyable.

Did it move you? I don’t think so. It was clever, as you’d expect a Douglas Adams book would be, but like I said about Dresden, it would take a lot for a book to move me (one book that comes to mind is Stardust by Neil Gaiman). I think I would be moved if I felt connected to the story in some way, if the author could make me feel like I was there, that I really cared about the plight of the characters. In Dirk, I don’t think I cared at all. I think I cared less than Storm Front. I mean, SF read like a fast-paced action movie, but I still cared about Harry and his friends. With Dirk, I had such a hard time early on understanding where the story was going, that I never connected with anyone in the book. Adams had a genius for writing clever, memorable characters and weaving concepts most readers wouldn’t grasp into his books. But he is almost too clever for his own good. I know this, like all his other work, is supposed to be a comedy–but it always makes his work feel cheap and vapid, despite his intentions otherwise.

Were the characters memorable? Yes. The characters in this book were vastly superior to the ones in Storm Front. Even minor characters like the Electric Monk and his horse were more memorable. Again, Adams had a knack for making characters that were alive, that stood out from the world and generated their own plots. It’s hard to complain about a book so well crafted, because his characters are better than most you’ll ever read. Reg and Dirk are the most notable. They’re the kind of quirky, unbalanced people that you’d expect from Adams–and any good British writer.

Did the plot hang together? In the grand scheme of things, yes. There was a plot, but it took a long time for me to discover it. The book jumped from character to character in each chapter, so that you weren’t sure where the story was going. It wasn’t until the end that you realize what this was all about. I guess you can get away with that when you’re writing comedy, but overall it makes for a dissatisfying book, in my opinion.

Were there any times you felt the book dragged? Yes, for most of the book. Like I said before, Adams is too clever for his own good. He likes to jump around, making the reader disoriented and unsure of what’s going on. My biggest complaint is that we don’t meet Dirk until half-way through the damn book! The title character and we almost miss him. There’s so much unusual preamble in this story, you begin to wonder if you’re reading a story at all. Now, I know I complained that SF moved too fast, crammed too much action into a single book that it made the story feel flat, but this story moved so slow that it was almost no story at all. There was rich characterization, lots of clever dialogue, and thought-provoking ideas, but the plot was almost inconceivable. Like I said, maybe that’s just how comedy books are suppose to go, but even Hitchhiker’s Guide moved faster than this.

Overall, Dirk was almost the polar opposite to Storm Front, which is ironic because I picked these books at random. It had memorable characters, clever dialogue but lacked action and a focused fast-moving plot.