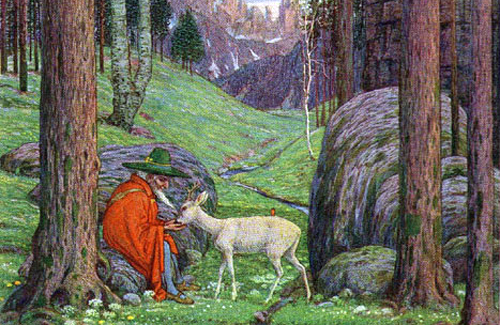 In an effort to improve my stories–comics included–I have embarked on what some might consider a dreadful task.  After reading Write Great Fiction – Plot & Structure, by James Scott Bell, I decided to follow one of his exercises that is suppose to improve my writing.  Not wanting to lay out the whole process in detail, here’s the skinny:

The whole process is supposed to take 8-12 weeks.  Crazy I know, but Bell says “If you follow these ten steps, you will jump ahead of 99 percent of all the other aspiring writers out there.”  I’d like to jump ahead.  Why not?

So that’s what I’ve been doing.  It took me some time to pick the right books that are similar to the novel I’m working on.  Apparently it falls into a small sub-genre called “occult detective” fiction.  Before I started writing it, I had no idea this was so.  The only stories that I was aware of like it were from Hellboy and some stuff from dead guys like Lovecraft.  Luckily there’s a whole sea of books in this category (good for me, since that means there’s an audience for it).  I sifted through Goodreads until I found a bunch that looked readable.

Now some of you out there familiar with the genre are probably screaming right now.  Don’t worry, my first book was apparently the best-selling of the genre: Storm Front, by Jim Butcher.  I was aware of the Harry Dresden series before, but didn’t know it was an “occult detective” series.  I’ve been reading these books and writing down my thoughts in accordance with Bell’s exercise.  Would you like to see what I thought?  Well, you’re going to anyway.  Below are the main questions I ask about each novel after I read them:

Those were enough to get me writing my unvarnished opinion about these stories.  The process of course is to help me anaylize what I think makes a story strong or weak, good or bad, so I can apply those principles to my own writing.  Will it work?  I guess we’ll find out together.

I finished Storm Front a while ago, so here is what I wrote a day after I read it.  Please keep in mind this is not a review of the book, just my thoughts about it.  Go read it yourself if you wanna.  If you’re a fan of my comic, you’ll probably like it.  If by some chance you’re Jim Butcher, you probably don’t care what I say anyway.  Drop me a line too, that’d be neat.

Oh and spoilers… I suppose. 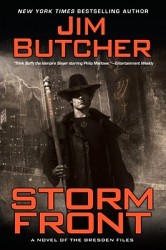 Did you like it?  Yeah, I liked it very much.  I went in, not knowing anything about the series, assuming it would be dreck, but was happily surprised.  I liked the character, Harry, and the wizard fantasy elements set in modern times.  Some of it reminded me of Gandalf and LoTR, and Neil Gaiman stuff.

Did it move you?  This is tougher to decide.  Books that move me have to have a strong, emotional element that connects to me on a personal level.  And although Storm Front was exciting and the Lead was likable, there wasn’t anything that really moved me.  That would have to be my only overall complaint with the book.  Although it had more substance than a lot of genre fiction I’ve read, it lacked a deep, literary substance that can penetrate a reader (me) on an emotional level.  It was a great read, I couldn’t put it down, but I never really got to know the people in the book.  They were characters in an action movie.  It really makes writers like Gaiman stand out, who can write great genre stuff, with a humanity and depth that sticks with you.  Butcher’s book reminds me of the Walt Longmire series; great stories and a likable Lead, but too shallow to haunt you.

Were the characters memorable?  This is a good question, because this process has made me think about what makes a character good.  There seems to be layers of what makes a character memorable or deep and lasting.  SF had good characters.  Butcher describes the important ones in great detail, especially Harry and Murphy.  He even goes as far as making their personalities distinct by giving them different motivations and even clever things to say.  But with all that flash there is a lack of substance.  Although the first person perspective gives me an inside look into what Harry is feeling and thinking, because he is such an isolated person in his world, I really  never got to know him.  I saw him reveal who he is deep down inside (it is even eluded to that that is a part of his character, that he is hiding a lot because he is a wizard with secrets).  Although that makes him mysterious in a way, it removes the possibility of a real, internal arc, which this book desperately needed.  The characters would be great in a movie or TV show, but they just felt like characters in a book, not real people.  I guess that happens when the story is moving as fast as this one.

Did the plot hang together?  This is the real strength of the book, its plot.  Butcher did a masterful job of taking a very tried and true formal, the hard-boiled private eye detective story, and adding his own dark fantasy elements to it, culminating in an exciting, Hollywood worthy, explosive ending (literally explosive).  The pieces of the story played out like a classic mystery, Harry had to find the magical killer, while dodging a host of enemies, some even former allies.  He is racing a clock, at the end of his rope, facing several forms of certain death.  It’s almost too much for a single book, and it made the story run at a neck-break pace.  A great page-turner, but my only complaint was if he slowed down for just a minute, he could have developed one or two of the characters more, and thus gave me a more satisfying ending.  When the bad guys die and everything is wrapped up, I didn’t feel like anything changed.  Circumstances were different, sure, but Harry was the same man, and his associates were more or less the same.  I would have liked a greater change take place between him and Morgan, or Murphy or even that fairy.  Perhaps a lot of those elements are set up for future books, but it’s this book that matters.  Setup stuff for it, not for the next 14.

Were there any times you felt the book dragged?  Not really, and I think that’s a part of the problem.  After the initial setup of Harry and his life, the books ramps up the speed.  So much happens over just a weekend of his life, there’s no time to slow down and get to know him or anyone else.  That caused Butcher to venture into a lot of telling not showing.  He gets away with it because of the first person perspective, but it makes a few parts of the book feel rushed.

The only scene that feels crammed in for padding is towards the end, when Harry has to save Murphy from the giant scorpion.  Extremely exciting for sure, but it comes at a crucial moment when Harry is suppose to be facing the main villain.  It’s practically a diversion and doesn’t tie in directly with the main plot–to stop Victor from using his magic to kill Harry–and even causes the main story to grind to a halt.  That sequence in the elevator is great, but it should have tied into the last sense, with Harry and Murphy facing off with Victor.  The last climax was over the top in comparison and less satisfying than the elevator scene.

Conclusion: I think I learned a lot about the difference between what some call a literary novel and a genre novel, after reading this book.  I never paid attention to the distinction before, but always felt empty after reading a typical “genre” novel.  They’re great on plot and action, but are very forgettable because they lack depth.  I never noticed this before, but it explains why I was upset.  It’s like eating McDonald’s when you’ve grown up on filet mignon–something’s missing.  If anything, it made me want to slow down my story and find opportunities to deepen my characters.

So that’s it.  Next post, I’ll write about book number 2.