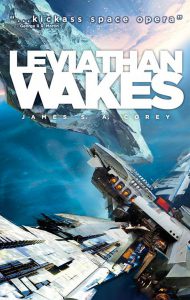 I haven’t done one of these posts in a while, mostly because I’ve been reading this long ass book! Leviathan Wakes is an action, science fiction novel by James S. A. Corey, who is apparently not a real person. It’s the name shared by Daniel Abraham and Ty Franck. Plenty of writers collab to make a book; these guys merged their names together in an unholy amalgam. Whatever.

What can I say about Leviathan Wakes? You should read this book. It is amazing. It combines elements of a murder mystery and hard-boiled detective fiction with action-packed space battles. Plus there’s vomiting zombies. I’m not even joking.

The story follows a duel narrative style. We follow the journey of two protagonists and their investigations at the start of interplanetary war. Abraham and Franck probably each wrote for one of the characters. I’d like to talk to the one who wrote Miller because he’s just great.

Leviathan Wakes creates a realistic version of the future. Mars is colonized (old news) and humanity has pushed out to the asteroid belt. Belters have lived on the fringes of our Solar system for generations, to the point where they’re lives and experiences differ so much from people on Earth and Mars, that sociopolitical circumstances have bred the conditions for war. Which, as I see it, will definitely happen should we colonize space.

But before you think this is some dry, tedious exploration of interplanetary politics, think again. It is hella exciting. From the very beginning you’re pulled into a sinister mystery and watch as a terrible war blooms around you. You’ll either root for Holden, the uncompromising captain, or sympathize with the burned out, grizzled detective Miller. I literally cheered when he did something that would shock most, but it had to be done.

The book’s not perfect (none are). There were about three times where I thought the book could have ended satisfactorily, but it kept going. Although I love a long book and never want a story to end, it felt like it was dragging. I think the last few chapters were tacked on to set up the future books in the series, rather than end this narrative. They feel anti-climatic after the events prior.

All in all its a book every sci-fi fan needs to read. It has just about everything you want in a novel. And plenty you’re not expecting.