Continuing my series of book recommendations, today I will be featuring “Stardust,” by Neil Gaiman.

The fantasy work of Gaiman is unlike any other.  In an age where too many books/movies/games follow the Tolkien method, Gaiman’s work is refreshingly original. 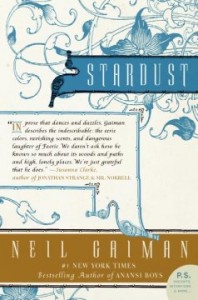 From the very outset, Gaiman paints a vivid narrative, so entrancing that you will forever gaze differently at the world around you.  Taking place in the small town of Wall, during the mid 1800’s, Stardust primarily follows the early life of Tristran Thorne, a remarkable young boy who, for the love a girl, crosses the barrier between the normal, mundane world and into Fairieland.

I can’t escape from the power of Gaiman’s prose.  While reading Stardust, your impressed by the beauty of every detail.  Some writers can transport you through the simplicity of their words, some through their overt description.  Gaiman simply puts the love of his story into his work; you feel it and in turn, grow to love it yourself.

Neil Gaiman is a modern master of fantasy.  All those who claim even a mild interest in the genre must be acquainted with his work.  Pick up a copy of “Stardust” to begin your journey.

Very rarely does a book come along that rivals the likes of Lord of the Rings. Patrick Rothfuss’ “The Name of the Wind” is just that sort of book.

It is the story of Qvothe, a seemingly simple innkeeper in an unassuming small village.  One day a strange comes knocking at his door and he is compelled to tell his life’s journey.  It is one that is captivating and unforgettable.

The richness of the settings, the emotions of Qvothe’s experiences, not only transport you to Rothfuss’ world, they

impart his world into you.  His writing is clean and unpretentious.  You forget you are reading a book.  You are living his life.

I am reticent to divulge any specific details of the plot.  I do not want to spoil it.  It is story you must embrace from the very beginning.  Suffice it say it is parts Dickens, Tolkien, and Rowling–while avoiding the derivative pitfalls in which many writers fall.

“The Name of the Wind” is the first part of the “Kingkiller Chronicles”; the rest of which has not yet been released.  I can say I am one of many eager to read the next installment (slated for 2011).  Pick up this book and you will be as well.

I’m not a fan of most modern fantasy books, largely due to the fact that their “cookbook” styled stories, with little originality or are just poorly written (ie. R. A. Salvatore).  So when I first heard of the premise of “His Majesty’s Dragon,” I wasn’t enthused.

But after a few recommendations, I decided to go to my local Barnes and read the first paragraph.  I was sold.  Not only is Naomi Novik a phenomenal writer, her style and imaginative world will suck you in… and never let go.

The book is the first of a 4-part series called “Temeraire.”  It is set during the Napoleonic  wars.  There’s one unique catch: there’s dragons.  The nations of Europe have Air Forces comprised of dragons, something that has survived since the Roman Ages.  A British naval office by chance discovers a rare dragon, captured by the French, and is plunged into this new life as a dragon rider.

The amazing draw of this story is the relationship between Captain Laurence and his dragon, Temeraire.  They develop  a close bond, something like a man and his dog–but on another level.  Temeraire is intelligent and sweet and fiercely devoted to his master.

You learn about this world along with Laurence and Temeraire.  Novik’s prose is powerful and description and incredibly “in tune” with the era.  Pick up this book and you will soon be searching for the sequels.

My only complaint is that stupid iBooks doesn’t haven’t the series yet!