Here is a little snippet I just jotted down.  It’s the start of a short story, covering the events that will soon transpire in The Wizard of Quippley.  Get a sneak peak at what’s in store for our heroes in the land of Welsley.  If you like it, let me know in the comments and I’ll post some more in the coming days.

I maintain that some of this might change before it reaches the comic. Such is the writing process.

“The mountains to the North have been a constant problem since the birth of Welsley,” said the guardian. He walked as he spoke, flanking the writing desk his guests sat beside. “There are the black orcs, who are deeply entrenched in strongholds. They consider it their rightful territory, even go as far as turning the animals in the surrounding forests against us. We’ve never–in our one hundred year history–been able to get them out.” His listeners nodded along. It was not an uncommon story. Yet one of them–an older man with a scruffy, red beard–knew it first hand.

“I am very familiar with the durgens of the North Mountains, Daglorous,” he said. “I was exploring those cliffs when you were still at your mother’s breast.” The comment brought a slight smile to he and his companions. The guardian was not amused.

“Far be it from me to ignore the experience of a wise man, such as yourself,” Dalgorous replied, “but it has been many years since you were a councilor for a king of Welsley and much has changed.”

“Yes, yes we get the point,” interjected one of the other visitors. “It’s very dangerous in the mountains. Do you think this is out first adventure? If you saw what we dealt with just to get here, you wouldn’t be wasting out time!”

The guardian leaned over his desk and looked down at his visitor. He was a squat, round-headed little man, with a thick bristling beard the color of hammered gold. He sat on a short stool, arms crossed. There was nothing about him that screamed ‘patience.’

“I have no intention of wasting your time, sir dwarf,” the guardian said. “But since you so generously agreed to aid us in this quest, I wished to prepare you as adequately as possible.” This brought an annoyed snort from the dwarf, but he spoke no more.

Daglorous continued. “The severity of this problem cannot be overstated. If we cannot retrieve the captured, out entire land will be in peril–and lands beyond.”

“I don’t see how the rest of the world would suffer,” came another voice. It was a young woman, cloaked in black. She stood at the back of the war room, half hidden in shadow. “He’s your king. Other nations will go on if he is dead.”

The guardian narrowed his eyes at the stranger. “Young lady, you do not understand the role my country plays in keeping this land safe. Our guardians fight night and day to repress enemies that plot to overrun all of Maora. If we lose our king, our society could fall into disarray. We would lose our will to stand.”

“You place too much importance on a single man,” she replied. “A man you lost so easily.”

“Alright, alright,” the wise man interjected, raising his hands. “Settle down, now. No use bickering. Let us discuss what we must do.” 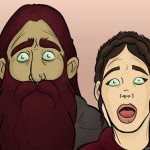 The “Inside story” is series of narratives describing the back story of the comic.  This is the first story, all about the village of Quippley.

Quippley is a small town in the Northeast corner of the Old Continent, situated between the towns of Beans and Welshish-shire, just north of the Great Spear-Wood  and approx 15 miles west of the Sea.

The village was settled by Alabumbus Quippley, a curious and outspoken individual who departed (some say forced) from the city of Markton due to his radical views on pig care.  He found a small patch of unoccupied land some 40 miles west of the old city and set up shop.  He built a stand there, selling snouts–but discovered there was very little foot-traffic so far away from any majors road.  He tried several other ventures, all failing, until he implored his older brother for help.  Thomas Quippley begrudgingly relocated his family and turned the land into a barley farm.  The resulting community was named after him (Alabumbus was subsequently driven from the village after trying to wed his brother’s prized sow).

Because Quippley had the queer reputation for taking in outcasts, over the years more than just farmers settled there.  At first the original townsfolk did not welcome their unconventional neighbors, but when they saw the lucrative income brought in through their ways, many abandoned tilling the soil for card games, magic tricks and the occasional sword swallowing.  As the surrounding region developed, traffic increased, and the citizens of Quippley earned better wages through their unusual professions.

By the year 446, Quippley had grown to a staggering population of 43.  A small collection of traveling wizards settled in along its outskirts, content with living in relative quiet among the motley community.  Among this folk was a young wizard named Algerbane and his wife and daughter.  His experience in Quippley will be told in full in Year 2 of the Wizard of Quippley comic.