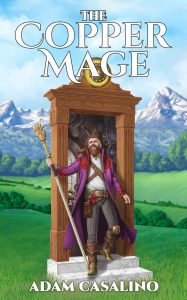 Those who have been following my work for a while know that I love writing about funny wizards and luckless dwarves. And now I’m happy to announce my latest work, “The Copper Mage” is available on Amazon!

Trystle, Keeper of the Unnumbered Doors, is the Copper Mage. He is a master of the secret arts, protector of a chaotic and unpredictable universe. When the king of the elves asks him to save his planet, Trystle must confront a deadly blight known as the red caps. But this mage will have to overcome more than just poison-spitting goblins, if he can prevent a catastrophe of epic proportions. Perhaps a bumbling, unassuming dwarf can lend him a hand?
This story is in the tradition of my old webcomic, The Wizard of Quippley, but with steampunk and sci-fi elements woven in.

The Copper Mage is a quick read and only $2.99. If you enjoy the story, please feel free to leave an honest review.

More stories are on the way. Be sure to check back often for updates and news!

The small, sad dwarf found a new friend. But who is Dasher and where did he come from?

Dasher moved fast. He was unlike anyone the dwarf had met before. Frequently, he would bound on all fours. This helped him climb trees to scout out the road ahead. More than once, the dwarf noticed Dasher disappearing among the branches and leaves. The dwarf called to him.

“What are you doing?”

“Oh, nothing!” Dasher would say. Then there came a crunch. The flapping of wings. Dasher jumped down from the trees, wiping his mouth.

They had left the town far behind and entered a forest. It was nothing like the forest the dwarf had passed through earlier. Here, the trees were gnarled and cruel-looking. Only a little bit of light came through the canopy. The dwarf heard eerie sounds wafting from the sides of the road. Dasher laughed off his worries, saying it was normal.

“I didn’t think much was still left alive,” the dwarf said. “After the end.”

“Oh, not much is,” Dasher said. “In fact, what you’re hearing might not even be alive.”

Dasher refused to explain what he meant. It troubled the dwarf and he kept away from the sides of the road.

“Are you sure the man and his daughter went this way?” the dwarf asked.
Dasher spun around. “Are you doubting me, my friend? Do you have any better idea of where they went? As I see it, I’m the only soul left who has seen your quarry. Might as well trust me, eh?”

The forest grew thicker. It worried the dwarf that the road became hard to follow. Soon, it seemed to vanish altogether. He followed Dasher across flat, dry ground, with no clear path at all. The trees grew thick and close together.

Dasher didn’t seem worried. Yet he stopped climbing up the trees.

“It must be getting late,” the dwarf said. He realized they had been walking for hours. “Very little light is coming through the trees.”

“No, the trees are just getting thicker,” Dasher said. “There’s light, just up ahead. We have to get over this, though.”

Whatever path they had been following was completely blocked. A sheer rock wall was in their way. Dasher was pointing up. The dwarf craned his neck to see to the top of the cliff, but couldn’t make out anything other than the tree branches. And the darkness.

“I don’t know if I can climb that,” the dwarf said.

“It’s easy! See?” With a leap, Dasher sprung to the cliff wall. As easily as whistling, he scaled it, disappearing into the dark. He came back down.

“I’m afraid I’m not as nimble as you, Dasher,” the dwarf said.

“Nonsense,” Dasher said. “All you have to do is grab onto those cracks in the stone, see?”

“Take your time,” Dasher said. “Maybe you’ll have a better time if you empty your pockets.”

“Sure. You can hand them over to me, if you like,” Dasher said.

The dwarf put a protective hand over his coat. “No, that won’t be necessary.”

He ran to the wall. Bumps and knobs stuck out all over the wall. They were small, but he was able to find them. Slowly, he moved up the cliff. He was sweating with effort. Dasher scrambled up past him, urging him on.

The darkness closed in around the dwarf. It felt like a million eyes were watching him. The air was close and warm. But also cold. He thought he heard voices all around him. He did not like what they were saying.

Pressing his eyes shut, he kept climbing. Something snagged his coat. The dwarf needed to pull it free, but he didn’t want to let go of the wall. Gritting his teeth, he let go with his left hand. He grabbed the corner of his coat and pulled. It felt like something was holding onto it. But it came free. The dwarf grabbed the rock again and climbed faster.

When he reached the top, he was cover in dirt. The dwarf collapsed across the flat, rocky ground. Light poured over him like a waterfall. He saw Dasher at the edge of the hill.

“You did it! I knew you could, friend,” Dasher said. He pointed further away.

“The road stretches that way. Care to take a look?”

Slowly, the dwarf got up and walked over to the edge of the hill. The land beyond was rough, full of caves and stony projections. Further away, though, it seemed nice. There even seemed to be a long road, stretching on for miles. The small dwarf could almost see houses. But they were too small.

“As I see it, we can go one of two ways,” Dasher said. “The Great Road goes North and South, past the Rock Valley.”

“Which way did the man and his daughter go?” the dwarf asked.

“Not much of that left,” the dwarf said.

“But they wouldn’t waste their time going to another abandoned town, would they?” Dasher said.

“Ah, but are there people there? Is it dead, like the last one?”

“If only we had a way to see it better,” Dasher said. “We shouldn’t waste all our time going there, just to be disappointed.”

“I know!” From his pocket, the dwarf produced the binoculars he found at the man’s house.

“My goodness, looking glasses,” Dasher said. “You are full of surprises.”

The dwarf looked at the land ahead through the binoculars. The tops of the houses were big and crisp. He thought he saw a thin line of smoke coming out of a chimney. But he saw no people.

“There might be people there,” the dwarf said. “Somebody’s cooking. I see smoke.”

“Let me see.” Dasher held out his hand for the binoculars. The dwarf held them back.

“Why won’t you let me use them?” Dasher demanded.

“All I want to do is use them for just a moment,” Dasher said. “Why are you being so selfish?”

“Give me the glasses, you little thief!” Dasher snarled at the dwarf. His face twisted into a gruesome scowl.

Dasher moved closer to him.

“I don’t know what you’re talking about,” the dwarf said.

“Don’t lie to me.” The dwarf turned to run, but there was nowhere to go.

Dasher howled as he pounced.

For every writer, there’s a method. But there are only a few rules that can make you a better storyteller.

Do you want to learn one that will instantly make your writing more interesting? Keep reading.

Stories need to feel like they’re really happening. A reader, even though they don’t know it, can get tired very easily.

A key to keeping them invested in your tale is to make it feel like there’s energy bursting off the page.

Oh sure, some writers do that by writing action-packed stories. Their books race along at a breakneck pace.

But what if that’s not what you’re writing? And even if it is, even the most “exciting” stories need to take a break now and then.

No, the real way to infuse energy into your stories has nothing to do with the type of content, but how you present it.

Check this out. What sounds better?

Silas was thrown into the wall by the ghost.

The ghost threw Silas into the wall.

Both sentences tell us the same thing. But the second sounds better by far.

The phrase “was thrown” makes it sound like it happened a long time ago. The second sentence puts the object first, making it feel more active—like its happening as we read it (even though it’s still written in the past tense).

This simple approach keeps a story fluid. There’s energy to what you’re writing. And that helps the reader feel more comfortable as they read.

It’s subtle. You might not think it makes an impact, but it does. Especially if you plan on writing a 50,000+ word manuscript!

Keep this in mind the next time you write. And if you’re editing your work, definitely make this change. 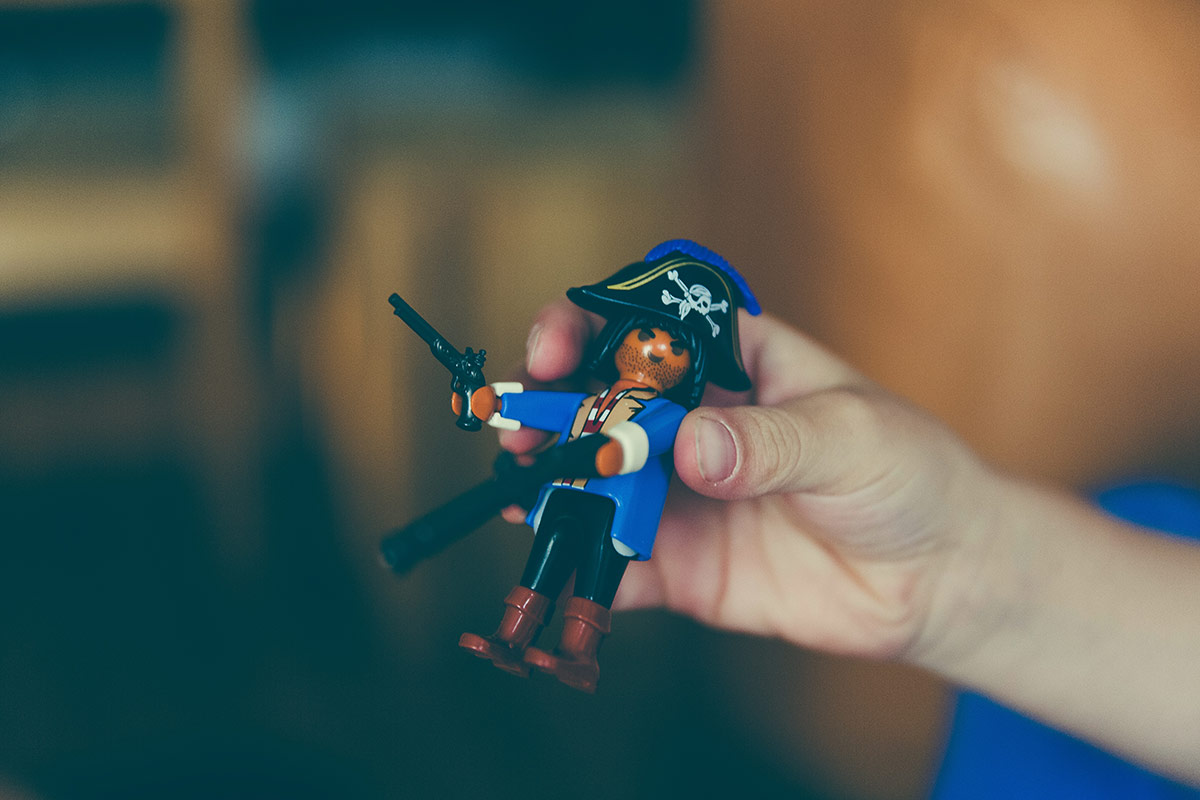 END_OF_DOCUMENT_TOKEN_TO_BE_REPLACED

Catch up with Part 1

Thadeus had left the palace. He was feeling pretty good about it. That poor sap, Menus, would be filling in for him while he’s out on an adventure. Heck, he might never go back. Let the kid enjoy being king for a while. He can’t do that bad a job, after all.

The moon was glittering high in the midnight sky. Thadeus gazed at it a long time. He had forgotten how beautiful the moon was. Why did it look different from the one he saw out his palace windows?

It’s because he was looking at the moon a free man.

He took a deep breath. The air was clear and cold. It chilled his lungs. Thadeus tightened the rough tunic around his chest as he marched down a narrow street.