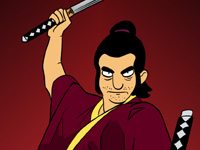 Born in 1701, in Boston MI, Adam Casalino has been running from the law for the last 2,000 years.  He’s assumed a form humans will accept for the safe of blending into their society.  In the interest of acquiring many small pieces of paper with assumed value, he’s developed a number of special skills.

In 2009 he started the hilarious and delicious Wizard of Quippley webcomic.  He has continued to tweak the comic, story, and art since then.  He also works on a number of strange and abominable projects, including Better Than Reading and sci-fi/fantasy short fiction.