Before you say anything: this is my opinion, based on nothing more than my gaming experience and personal tastes.  Yeah, opinions on WoW are a dime a dozen on the internet, but this is my blog, so I’m going to write what I want.  I don’t expect Blizzard to bend to my will, but perhaps this will encourage players to speak their mind and even enjoy the game more.

No big surprise, I play World of Warcraft. I’ve been rocking in the land of Azeroth since November 2006, right before the Burning Crusade. I am by no means an expert on the ever-expanding, ever-improving MMORPG, but after four years I have a few thoughts. Today begins what will probably be an ongoing series on ways I think Blizzard can improve their seminal game.

There is no doubt the WoW has undergone massive changes since its release in 2004, but in this rapidly morphing gaming universe, with the constant rise and fall of franchises and IP’s, a game needs to push its ascetic appeal in order to stay relevant. WoW has done a good job of doing this. I say, good, not great. With each new expansion Blizzard has improved the overall quality of its landscapes and new items/armor have higher resolution textures. Even new NPC’s look more realistic.  But there is always room for improvement. 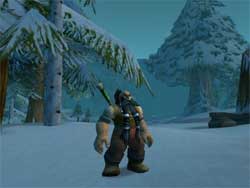 For some reason Blizzard has been reticent to make more dramatic upgrades to it core game design, as well as the models for the playable races/characters.  Compared to the look and quality of competing games, their toons are frumpish and awkward.  Blizzard seems married to this cartoonish style for their world, which is probably nothing more than a nostalgic attachment to their past games, where the style was unique and new.  But now it’s 2010 and Azeroth really needs a makeover.

Now I’m not dumb enough to say that keeping things the way they are will hurt WoW.  I’ve seen this game grow in spite of many problems/annoyances.  After SIX years the community is still growing, as would-be competitors fall by the wayside.  World of Warcraft has a devoted army of players that continue to return, year after year.  This is due to WoW’s addictive game-play, easy learning curve, clever marketing campaigns, and the ability to incorporate other MMO’s ideas into its system (*ahem* achievements, titles, quest locations marked on the map, etc).  So my comments are no threat, just my personal input.

One of the arguments on why WoW’s graphics have stayed relatively outmoded, is that a next-gen MMO is on its way.  This is a fairly old rumor with little fuel, and with the Cataclysm expansion on the horizon, it would be years before a stand-alone game replaces WoW.  The bottom line is WoW came out in 2004 and to revamped the graphics to today’s standards would mean making an entirely new game.  But it doesn’t mean they shouldn’t try.