Here’s a sketch of Mayatha from next Tuesday’s comic.  I know I’ve been talking a lot about her lately–in my mind she’s becoming more and more of an important character.  A while back I realized the story needed a strong female.  I had planned on introducing someone  further down the road that would fill that void, then Mayatha came along.  I had only intended on her being in a few comics while Al and Peter were at the Tower, but now I have bigger plans for her. 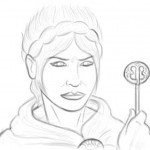