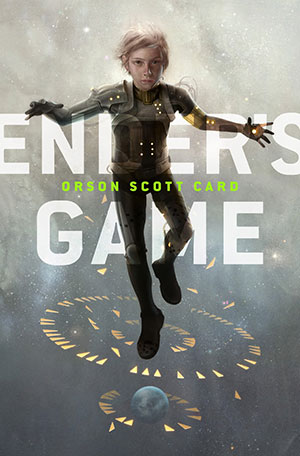 I’m not sure what to make of Ender’s Game. Yeah there was a failed movie and the writer is a controversial figure these days. But that doesn’t matter. What matters is what you feel about the book. Ender’s Game feels like a book that’s been copied and borrowed-from too many times to have the same impact when it was first published.

I won’t go on and on about the plot. Suffice it to say, it’s about humanity fighting off an alien force. They enlist children to help with the war effort. And although there’s some unexpected twists and revelations, particularly by the end, it loses its impact in an age when there are so many other Science Fictions books with similar ideas.

(Old Man’s War comes to mind, but that book has much more humanity in it to make your care).

And that’s a problem, because the uniqueness of the book is a large part of what can make it likable. Ender is a hard character to relate to. He’s young, but not childlike. He already has the makeup of a hardened soldier. He faced daunting odds, sure, but as a reader I didn’t care about him.

Couple that with the style of the writing. I generally look past style if the book’s engaging. You forget about the writing when engrossed in a well-written book. But there were numerous times the author over explained a character’s motive or emotional state. I skipped over long paragraphs that repeated what was succinctly said in the very first. That kind of verbosity felt over-indulgent on the writer’s part (but a good lesson to learn for new writers).

I almost feel like this is a “don’t meet your heroes” experience. Ender’s Game has been a celebrated Sci-Fi book for over twenty years. A classic I assumed I should read. But I was at best left nonplussed. It’s not a bad book, just one dated because of its influence. And too dour and negative to make me like the characters or setting.