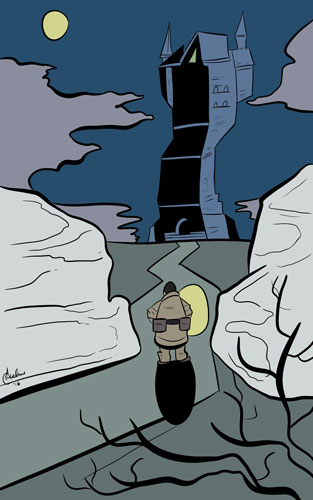 Robert Asher was thrown off the back of the truck. They didn’t even have the decency to stop. He sat in the snow as the vehicle rumbled away at top speed. It took the corner down the mountain a bit too hard and nearly flipped. The driver didn’t care. He just wanted to get away as quickly as possible.

Slowly, Asher stood to his feet. He knew going back down the mountain was useless. They’d find him eventually and bring him back. Of all his clients, they were by far the worse. Pushy. Uncooperative. Plus, they refused to pay. But Asher had little say in the matter; he had been kidnapped after all.

Asher pushed through the snowdrifts toward a shape in the distance. The snow had piled up on either side of the road, trees casting shadows like long fingers. The sun, which had been hidden by clouds all day, was now giving up and setting. Only until he was a stone’s throw away could he see what was waiting for him at the end of the road.

His clients did a poor job of describing it. It looked like someone had taken several houses and stitched them together. Lopsided and asymmetrical, the building was a contradiction of physics. Spires poked through the roof; medieval battlements clung to the eaves. Asher wondered at the kind of mind that could conceive of such a monstrosity. It wasn’t sane, that was certain.

Asher mounted the steps, instantly feeling small and powerless before the mansion. The front door had iron rings for handles. He lifted one and let it drop like a knocker, vaguely hoping someone would answer. The noise reverberated through the air until it faded harmlessly into the wind. Gripping one of the rings with both hands, Asher pulled. Inch by inch, the door opened.

Snow blew in after him as he entered. Asher left the door ajar. In the crack of light he searched his pack. His clients declined to offer him supplies, but were considerate enough to leave him the ones he brought. Asher took out his electric lantern and turned it on. Thankfully, it survived the trip and a small glow illuminated a portion of the room.

Asher took in the entry hall. A stone floor, covered in threadbare carpet, stretched on for a hundred yards. Paintings lined the walls, shrouded in darkness. He looked at one. It was a landscape, perhaps of the surrounding region. European mountains loomed over a valley town.

Picking his way through the shattered remains of a chandelier, he reached the end of the room. There was a staircase leading to the upper floors. A door nearby was ajar, leading to the rest of the ground floor. Looking them over, he considered his options. He decided to start in the basement.

It was always in the basement. Years of flushing out eldritch horrors taught him that. He checked for an entrance. Stopping at the back of what was once a kitchen, he found a trapdoor. He opened it, discovering a ladder leading into darkness. Hooking the lantern to his belt, he descended.

He landed in a small, gray room. Iron chains hung from the walls. Asher knew what the room had been used for; he didn’t want to think about it, though.

The basement beyond was a catacomb. Pillars held up low, arched ceilings. Shelving was cut into the wall, filled with bones and broken pottery. Torches were set in the wall, giving enough light. Asher put away his lantern and took out his revolver. It was no ordinary weapon. Made of thick steel it was twice the size of the average gun. The slugs were iron, coated in anointing oil. Checking the cylinder, he methodically searched the rest of the basement.

He found it in the corner of a workshop. Books and tools littered the floor. Diagrams of human anatomy clung to the wall. Hunched over a table was something like a man. Only a loincloth covered the gray, massive frame. On the table behind it were chunks of human flesh, piled like red meat. Slumped over, its back to Asher, it looked asleep. He took a step into the room. The thing turned around.

It snarled at Asher. Where there should have been eyes were pits filled with fire. The creature charged and Asher fired. A slug sunk into its shoulder. It paused, surprised at the injury, and went for him again.

Asher fired again, but the creature was too fast. It dodged the bullets and was on him in a blink. A massive hand covered Asher’s face. It threw him into a pillar. He recovered in time to the blow. The creature punched the pillar, leaving a hole in the stone.

Dropping his gun, Asher pulled a kris from his belt. The wavy blade glinted in the torchlight. As the behemoth bent low to grab him, Asher slashed at its face. The dagger cut a trench from its chin to an eye. The creature dropped back, a hand its face. Fire dripped from the wound like blood. Asher threw himself at it.

He knocked the creature off balance, scrambling to catch it with both hands. It fell out of Asher’s reach, bounced off the wall, and slid into an alcove. Grabbing one of the workshop tables, the monster hurled it at Asher. The man dove, shielding his face from the scalpels, needles, and bottles that flew through the air. Using the distraction, the creature bounded away. Asher followed. They reached the end of the hall where a flight of steps led to a door.

Asher tackled the creature and they both stumbled outside. They rolled across a small cliff at the back of the house, overlooking a sheer drop. Asher clawed to stop himself from falling off the edge. The creature was already on its feet. It scooped up Asher, pressing him against the outer wall of the house.

Asher felt the air escaping his lungs. Reaching out with both hands, he grabbed the sides of the creature’s head. Mustering what was left of his concentration, Asher walked into its mind. He felt hundreds of years of memory crash into on him. He saw a younger version of the house, surrounded by a different landscape. He saw forgotten generation, their faces frozen in terror. He saw a madman, standing over his creation, laughing in triumph. He saw a child, tortured, transformed into an abomination.

The creature felt Asher in its mind. With a cry, it pried his hands away and stepped back. It cradled its head and wept. The sobs were like bursts of wind. It knocked Asher against the house and jumped from the cliff. Its roar echoed across the valley, reverberating among the mountain peaks.

Asher crawled to the edge of the cliff. Far below was the creature, its body dashed against the rocks. The fire in its eyes faded, until nothing was left but a trail of smoke.

Robert Asher carefully picked his way around the cliff to reach the front of the house. He refused to go back inside. His clients were waiting for him. He didn’t have to tell them the creature was dead. Half a dozen men, torches and Molotov cocktails in hand, ran to the house. With the creature gone, they could do what they had been wanting to do for generations.

They offered Asher a ride back into town, promising an ample reward. He declined. He wanted to walk down the mountain by himself. They nodded, unaffected, and turned back to the house. The smell of burning wood stung is nostrils. He took a gulp of air to cleanse his senses. As night set in the light of the fire filled the sky, casting eerie shadows across the mountain and the village beyond.