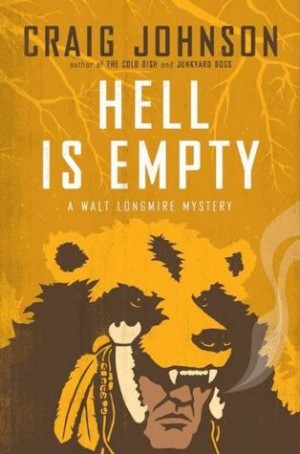 I don’t think I can say enough good things about the Walt Longmire series. I’ve been a fan for years, ever since I discovered The Dark Horse on Audible. It’s the fifth book in the series and I immediately went back and started on the first. Hell is Empty is the seventh book in the series.

The book details a harrowing day-in-the-life of a Wyoming sheriff named Walt Longmire. While escorting a group of violent criminals to a team of FBI agents, the most dangerous escapes. Walt is the only man able to track the dangerous, and very crazy, Raynaud Shade up the mountains during a snow storm.

Most of the Longmire books blend rich characterization with compelling detective work. As a reader I really believe there is an intrepid, Vietnam-vet sheriff somewhere in Wyoming, solving crimes with his Cheyenne buddy. The stories are engaging without being saccharine or clichéd. And because it’s an ongoing series, I got to know the characters better than most TV shows.

Hell was a refreshing installment. Johnson manages to bring something new to each book while maintaining a consistent tone. The previous entry Junkyard Dogs felt like a misstep, bordering on comedy. It took a long time for the main case to arise and I was wondering where it all was going. With Hell Longmire’s back on form, jumping straight into a mind-bending challenge almost from the beginning.

Even so, the book drags, especially towards the end. I wanted it to be over with several events earlier. That could have just been my own temperament, or the pace at which I read it. There were plenty of great moments to end the story on, but it kept going. The final climax feels, well anticlimactic, after the harrowing moments leading up to it. But with a writer like Johnson, I’m not entirely surprised. He loves to subvert expectations and throw in twists whenever he can.

A special note about the audiobooks: definitely listen to the audiobooks. Narrator George Guidall is fantastic. He brings Walt to life, along with the many colorful supporting characters. This is simply a series that works best with his voice behind it.

TL;DR: get started on the Walt Longmire series. Be sure to get the audiobooks. 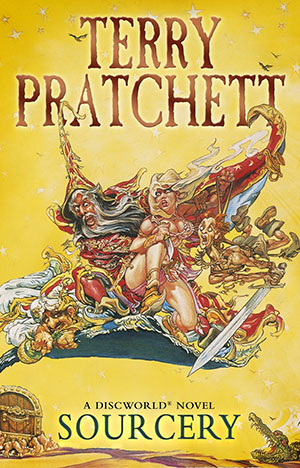 Sadly I got into Discworld just a few months before Terry Pratchett died.  I had heard of it for a long time, but didn’t bite the bullet until earlier this year.  I regret not experiencing the adventures of Rincewind and his colorful friends while the author lived.  Maybe I could have enjoyed the experience of reading each new book as it came out.  Either way, I was just getting into this magical series when I heard the news of his passing.  Weird and sad all at once.

But that hasn’t deterred me from pressing on.  There are over 40 books in the series, a massive achievement for any writer.  Sourcery is the 5th in the series.  I won’t bother going over the earlier ones.  They’re great in varied and special ways.  Go and check them out if you wanna.

A part of me feels like Discworld is the series Tolkien would have written had he grown up in the 60’s.  There is strong satirical vein throughout it, a obvious jab at the fantasy troupes we fanboys and fangirls know inside and out.  But there is also a true love for the genre, a love that seemed to grow with every book (I’ll say right now that so far, my fav book in the series is Equal Rites, but enough about that).  Discworld is the kind of high fantasy you’ll be ready for once you’ve gorged yourself on LoTR and Harry Potter and have graduated onto something smarter.  And smart it is.

That being said I had a hard time enjoying Sourcery.  It’s not a bad book.  It’s probably a great book.  But the way in which Pratchett lays waste to the Discworld, as the unstoppable boy sourcerer destroys everything in his path, even trapping the gods themselves, thus releasing frost giants to finish the job, was disillusioning.  It almost felt that five books in, the author was trying to destroy his own creation.  Or aiming at a soft reboot of sorts.  But these books are always looking for ways to rewrite the rules the last one established.  It makes sense, if you “get” this kind of story.  Irreverence even unto itself.  It’s entertaining and refreshing, but it can devolve into meaningless cynicism rapidly.

It don’t think Sourcery is cynical in any way.  Cynicism is a modern day poison that kills creativity.  But it does teeter on the edge a few times, almost going to such a point that you feel the stakes are meaningless and life in Discworld doesn’t matter.  But I believe Pratchett had too much heart to push us over.  He always pulls us back in time, saving the day once again.

The Discworld series is an amazing journey.  It’s unlike most fantasy you’ll ever read, but it has it’s highs and lows.  You need to adjust your expectations in order to appreciate the humor and rhythm.  Once you do it’s a series worth losing your afternoons in.  Sourcery may  have had a few bumps for my taste, but it was gold where it counted.

TL,DR: Check out Discworld, once you get tired of D&D and Harry Potter.