Here is the new look for Algerbane, complete with colors. I didn’t add any highlights to the colors, as this will also serve as the palette for when I color him in the comic, and I just need the flats. So what do you think? Is he wizardly enough, or did I go too far? 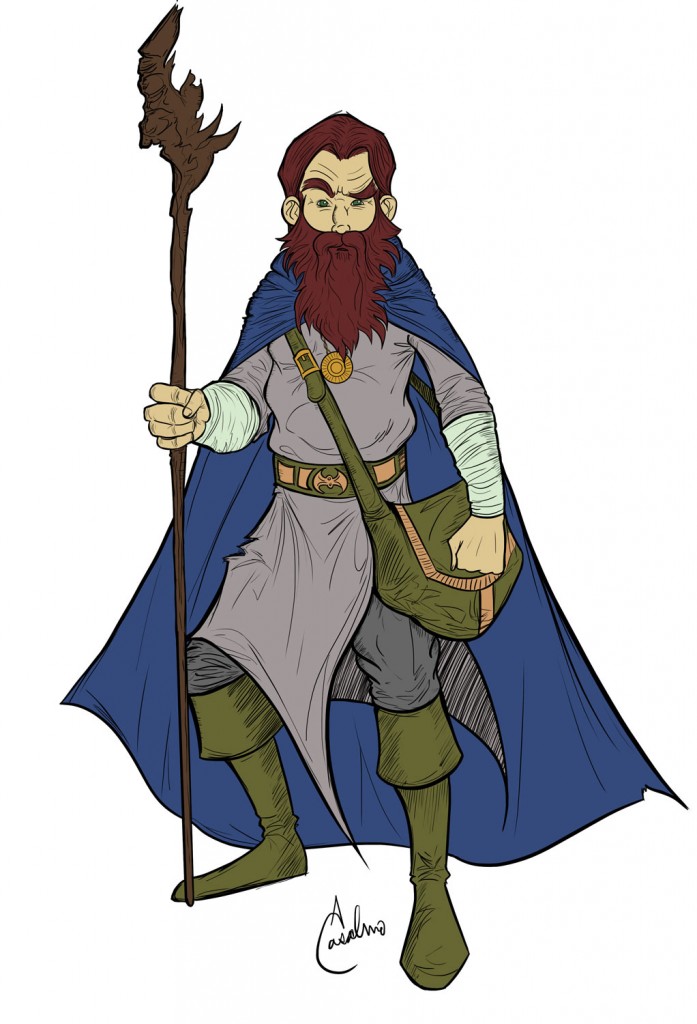 Those of you who follow the comic’s twitter or Facebook page got a sneak peak to the following silliness.  On a whim I decided to draw what I think Algerbane would look like had he lived in the Old West.  I figured he’d be a sheriff, with a gun instead of a stave (since they all had guns, I suppose)–though I did sneak him a magic ring.  Take a gander below (clicky for large): 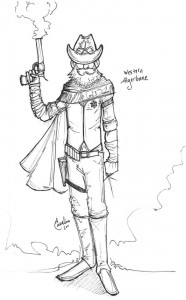 Here’s a sketch of Al, sans hat, possibly at the ol’ saloon: 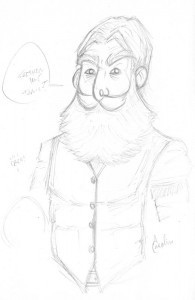 I really got a kick out of this lil’ diversion.  I wish I could come up with a fun western comic, but I don’t think I know enough about the era to make it believable.  Yes, I don’t really know enough about the middle ages to write The Wizard of Quippley, but with high fantasy, it’s easier to fake =P.  I might add some color to the first sketch and put up on my deviantart page.

I sat down to work on the map and draw a few sketches and I stumbled into drawing Algerbane as he was at age 13. 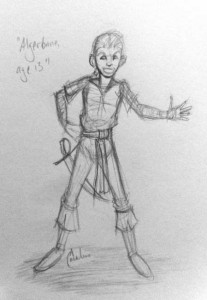 Along with the sketch came a small look into his childhood and upbringing:

Algerbane was born in the city of Welsley, the son of a farmer-turned merchant and a devoted homemaker.  His father’s vocation brought in a comfortable life for the family, so Algerbane was privileged to spent his early years reading, instead of toiling in a field.  Of all the books he read, he loved most adventure tales.  His dream was to one day become a swashbuckling sailor.  Though his land-locked home was far from the sea, he imagined himself exploring undiscovered vistas, wresting gold and treasure from ill-bred pirates.

But at the age of 13, his mother became gravely ill.  Only the craft of an old, unassuming “wise-man” was able to restore her health.  The experience changed Algerbane forever.  The idea of becoming a sea-farer no longer held allure for him.  He resolved to discover the secrets of this wise-man, and thus embarked on a journey that led him into the world of wizardry.

There’s quite a bit I want to write concerning Algerbane’s past.  How he became a wizard, his early years as a councilor and advisor.  And what ultimately lead him on his journey against Mordred.  I’ve mentioned a little bit about this in the comic, but there’s always more to say.  I’m loathe, though, to put too many “flashbacks” into the comic itself and the idea of launching a prequel seems an unattractive prospect (thank’s a lot, Lucas!).  But I’ll find a way to tell that story, maybe as a book.

Here is a sneak peak at next week’s comic. Behold Algerbane, looking a tad stern.  You’ll notice the blue pencils beneath the black and white line work. 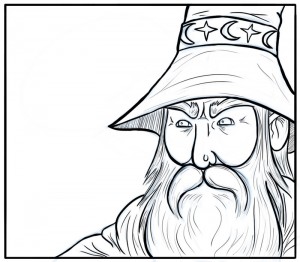 This is a complementary piece for this week’s comic.  A little bit of prose that I couldn’t fit into the script.  Enjoy.

The steward pulled the sword from the sheath and rapped it with a fingernail.  The blade gave off a bright ‘tang’ sound.

“A sturdy weapon,” he said to Algerbane as he returned it to its sheath.  “A good steel blade–it should serve you well.”

He handed it to the wizard, who measured its weight in his hand before drawing out it himself.

“I hate the thought of carrying another item,” he said as he eyed the shining sword, “but I have no choice.”

He proceeded to attached the sword to his belt as Peter approached.  In his hands he cradled a blue bowling ball.

“Eh–absolutely not,” Algerbane snapped.  Peter grunted sorely and dropped the ball like a spoiled child.

“I would think you’d be eager to pick out a weapon,” the wizard said.  “Humberg here can certainly find one to suit you.”  He motioned to the steward, who began to enthusiastically pick out swords for the dwarf.

The steward paused.  A sickening look passed over his face.  He turned green.

“Aye, do it all the time,” answered the dwarf with a nod.

“Unless you mean the ribs of a chicken–I must disagree.”

Peter grunted again.  “Just take me to the axes!”  He shuffled after the steward as Algerbane called after them, “Yes Humberg, the rib-cracking axes!”

I wanted to show off some of the high quality versions of my comics.  So I’m going to start posting samples from recent comics on deviantART.

The first one is of an intense Algerbane, from WoQ #73: